Boys, what do you mean, you don’t have on underwear? 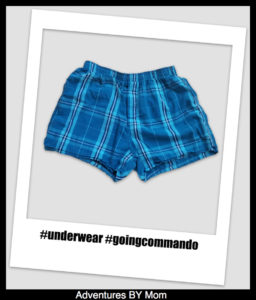 What is it with men and boys not wearing underwear? I truly don’t understand it. Maybe, because I’m a girl? There have been a number of instances that have convinced me to give up the fight. Forget the underwear, focus on showering, teeth-brushing, and deodorant wearing.

No Underwear – at the Doctor’s office

The first time I was made aware of my oldest son not wearing underwear, was by our pediatrician. Harley knew he would need a vaccination at his 11 year check up. I knew he would freak out, and have an all out fit about going. So, I did what any good mother would do. I tricked him.

Me: Harley, go take a shower. I have to run some errands, and you need to go with me.

He whined and fussed a bit about the shower, but 20 minutes later, we were out the door.

Half way through the drive, his brow furrowed.

Harley: We are going to the doctor, aren’t we.

Harley: I don’t want to go. I’ll have to get a shot, and I HATE shots.

Me: Yes, I know you HATE shots, but they keep you healthy and safe. So…you are going. And, besides, the doctor just likes to make sure you are growing and everything is the way it should be.

He wasn’t happy. We waited a bit before being called back. The nurse came in and took all the vitals; asked if we had any concerns or questions. When she was done, she assured us the doctor would be in shortly. Then, we waited a bit more for the doctor to come in. She listened to his breathing, his heart, checked his reflexes, listened to his stomach. She turned to me and said, “Mom, I need to check his boy parts to make sure everything is developing and growing as it should be.” She looked at Harley and said, “I am going to look at your boy parts, okay?”

He blushed a bit, but agreed. She lifted the waistband of his shorts, looked in, and looked at me. She asked, “Mom, are you aware he isn’t wearing underwear?” I could feel my face begin to turn red and my eyes widen. I saw Harley turning red and a sheepish grin spread over his face. I didn’t know what to say. No, I wasn’t aware. He took a shower. He was clean. No underwear? Who does that!?!

The doctor laughed. She said not to worry as it apparently is more common than most moms would like to admit. Once she was done, she told Harley he was growing as he should be. His height and weight were good for his age. The nurse came in, gave him his shot with minor commotion and panic involved.

We wrapped up the well doctor visit and went ice cream. Ice cream fixes almost everything from the pinch of a shot to the shock of finding out your son isn’t wearing underwear.

Flash forward a couple of months, and we have our first cold front in Texas. This means we need new pants. It’s warm enough most of the year to wear shorts. The first cold snap is when you realize how much your children have grown. So, off to Target we go. Hubby needed new pants for work. Both boys needed new jeans for school, as it was too cold for shorts. Everyone gets the size they think they need, and we head to the dressing rooms. The boys go in one. My husband stands there.

“Aren’t you going to try those on? They might be too short, or too tight depending on how they are made.”

The hubby replied, “No, they’ll be okay.”

Me: Really, I’m not returning them for you. Go try them on.

Me: Deep sigh, shaking of head.

So, I go to the dressing room door where the wild boys were sent with their respective new pants.

I ask, “How’s it going? Do they fit? Do you need a different size?”

Me: Did they fit?

Harley: Ummmm, I’m not sure.

Harley: I can’t put them on.

Me: Why not? Help me understand. I don’t want to have to bring things back. It’s a pain to return things. Please go try them on.

My last words for the shopping trip: Go stand with your father.

No underwear: What changed?

Eventually boys will start wearing underwear. What changes? Age and. . . .having to dress out for Junior High PE. The change is short lived. Once they are comfortable and on their own – they stop wearing underwear again. They think no one will know. Boys! What was I thinking!?!

Easter Egg Hunt for Older Kids
A Spot of Tea?